Jon Lowery brought an extensive background to St. Thomas when he was named head coach in April 2012. It didn't take long for Lowery -- just the fourth head coach in UST program history -- to elevate the Tommies to new heights onto the MIAC and national scene.

The 2017 Tommies became just the third conference team in the last 27 seasons to post a 10-0 MIAC finish.

Lowery's No. 4-ranked St. Thomas team lost in the national playoff quarterfinals, 1-0 on the road at No. 5-ranked North Park (Ill.), to end the season 22-2. The Toms had a 19-game win streak halted and fell one victory shy of a return trip to the national semifinals. St. Thomas won 3-0 the previous day over No. 10-ranked Otterbein -- the team's 33rd victory in a row when it scores multiple goals. The 2017 UST squad broke a school record for goals with 56. St. Thomas senior Shae Bottum was named National Player of the Year and MIAC Player of the Year, and repeated as All-America. Justin Oliver also made second-team All-America.

The Tommies' 2016 success was historic. They won the program's first solo MIAC title for the first time since 1991 with a conference mark of 7-1-2 and later captured the conference playoff tournament crown to receive an automatic berth into the NCAA playoff tournament. St. Thomas then posted victories over St. Scholastica, Luther, Benedictine (Ill.) and Redlands, including three comeback wins in overtime. They advanced to the Division III Final Four for the first time in program history. The Tommies lost 2-1 to eventual champion Tufts in the semifinals to end their remarkable season with a third-place national finish and a 20-2-3 record. The team also set school records for victories (20) and shutouts (16). St. Thomas senior Mark Heydt, the MIAC Player of the Year, was selected as first-team All-America, and junior Bottum made third-team All-America.

An elite soccer goalie as a player, Lowery completed at both the NCAA Division I college and professional levels. As an assistant coach he learned from some the finest D-I mentors, each of whom is the all-time wins leader for their respective schools, working under Sam Koch at UMASS-Amherst, John Bluem at Ohio State, and Jay Vidovich at Wake Forest University.

Lowery said the Tommies will look to continue to raise the bar in all aspects of the program, with the philosophy to empower each individual to become the best student and player possible while respecting the values and expectations of the university. 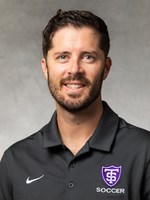 Evan Sassano is entering his first season as the assistant coach of the St. Thomas men's soccer team in 2021.

Sassano has previous experience as a head coach at Holy Names University, and in an assistant's role at both San Francisco State University and at his alma mater, University of Californiam Berkeley.

He spent his college days competing as a starting defender for the Cal Golden Bears, contributing to two Pac-12 Conference championships. After his collegiate career, Sassano played professionally overseas in Germany and the Netherlands, as well as in the U.S. for the Minnesota Stars of the North American Soccer League.